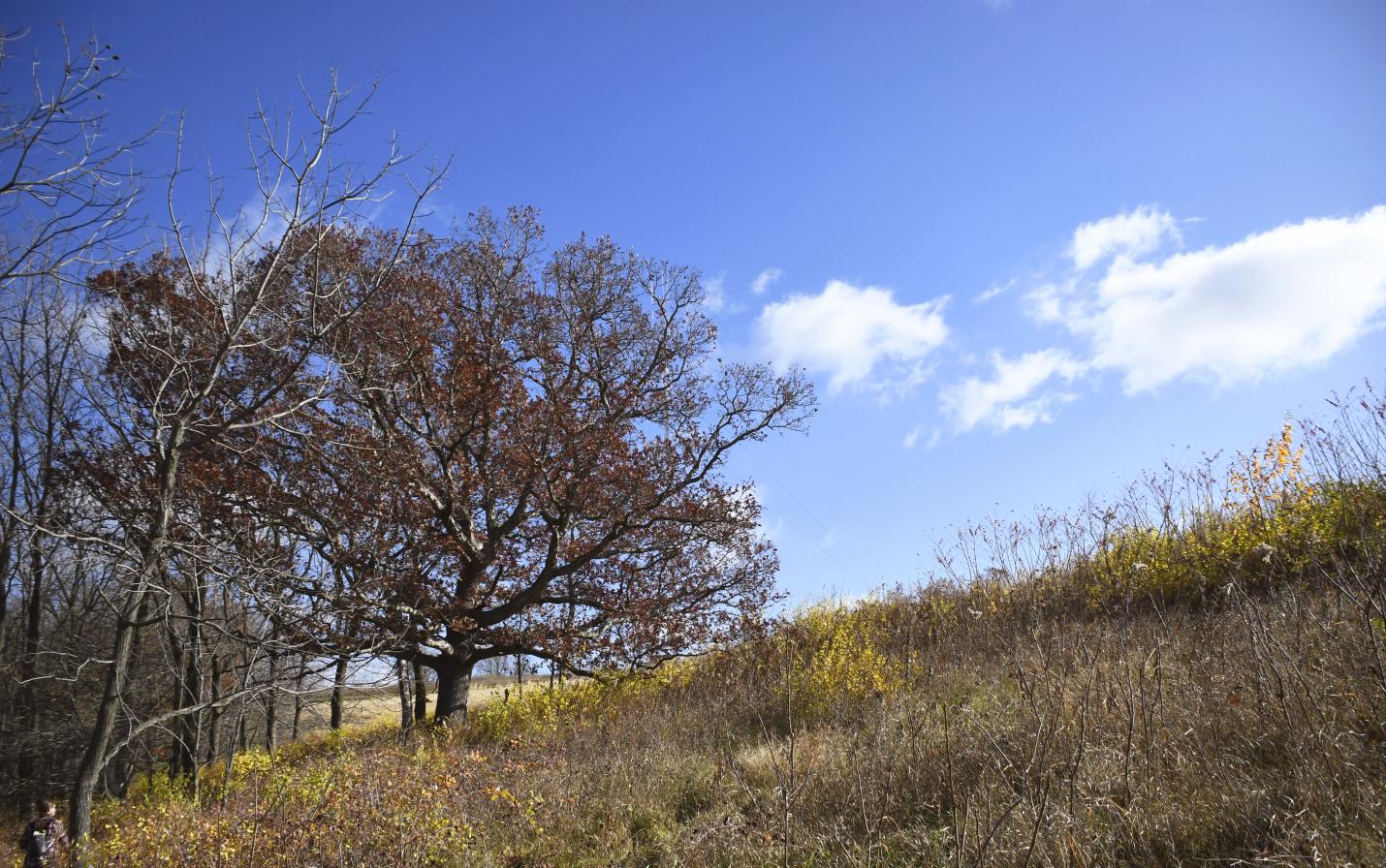 LA CROSSE, WI – When Mary Helgren and Rich Radek of Madison, Wisconsin, purchased a 78-acre property near the Crawford County town of Seneca back in 2002, they already had good instincts about land conservation and were ready to learn and do what was needed to care for their piece of heaven by giving back to the land. In the same year, they took over the previous owner’s Conservation Reserve Program (CRP) contract and began their journey of land restoration. Since then, they have entered into a new CRP contract, have met many local experts, and have learned more than they ever imagined they could. Now, to protect all they’ve done and still plan to do for the land, they have entered into a permanent conservation agreement with Mississippi Valley Conservancy.

That agreement, called a conservation easement, specifies that the land cannot be mined, subdivided, developed for housing, or otherwise commercially developed. The conservation easement is a legal commitment that subsequent owners must honor, guaranteeing that the land will be available for its scenic values, for its importance in slowing runoff and erosion, and for the wildlife habitat it provides.

Both Mary and Rich grew up in families that enjoyed outdoor recreation in the Driftless Area of the Mississippi River Valley. During their courtship years, they camped in Wyalusing and Perrot State Parks in Wisconsin, but they didn’t want to compete for campsites, so they soon decided to find one of their own. Their search for and eventual acquisition of land near Seneca introduced them to a number of local experts who helped them determine how best to care for their land. These included Rick Lange, who was working for the Crawford County office of the Natural Resources Conservation Service (NRCS) and later served on Mississippi Valley Conservancy’s board of directors.

“Rick guided us through the process of retaining the CRP status of the land, and he was generous with his knowledge of the local ecology and of creating land management plans,” said Mary, who was delighted to be carrying on the conservation values she acquired from her family, which had deep roots in prairie restoration. Her parents and grandfather were involved in the conservation and restoration of Chiwaukee Prairie State Natural Area in southeast Wisconsin as well as prairie restorations in Gurnee and Waukegan, Illinois. Her aunt studied ecology at UW-Madison, taking classes from Aldo Leopold. Mary and Rich also expressed much gratitude for all the connections Rick Lange shared with them, including introducing them to Mississippi Valley Conservancy.

Rick hopes Mary and Rich serve as role models for other non-farming landowners. “CRP may not be here forever, but a conservation easement will,” he said.

“Mary and Rich purchased this property with a love of prairies in mind, and they didn’t waste a second in pouring their love into the land. Much of the land had previously been used to produce crops in contoured fields. Mary and Rich have been restoring those fields to their original state as grassland through rotational prescribed burns and interseeding of diverse seed mixes,” said Krysten Zummo, conservation associate for the Conservancy. “All of their love and care has paved the way for other native plant species, such as cream gentian, which showed up within the prairies on its own. When we met with Mary and Rich to tour the property, Mary stated that her ‘romantic notion’ is to return it to pre-settlement condition.”

A recent discovery has deepened Mary and Rich’s already strong commitment to land conservation. While mowing brush, Rich found new sinkholes that most likely were created during the heavy rains of 2014 and 2015. When they sought to find out more about sinkholes, the couple learned about the vulnerability of groundwater in areas that have karst geology – Crawford County being one. The fragile limestone of karst geology is susceptible to being dissolved by water, and the resulting cracks, sinkholes, and caves can lead rainwater run-off, including contaminants such as manure, fertilizer, and herbicides, directly into the water table that provides drinking water throughout and beyond the county. After learning about the relationship between sinkholes and water quality, Mary and Rich have worked to ensure that a buffer of perennial vegetation remains intact around sinkholes, helping to protect water resources from pollution. Their prairie management plays a large part in the protection of drinking water.

“We’re very concerned about the expansion of concentrated animal feeding operations (CAFOs) in Crawford County because they’re putting our most precious resource – clean water – at risk,” said Mary in discussing a recent presentation she made at a meeting of the Crawford County Land Conservation Committee. “We hope to share the story of sinkholes on our property with others who may not know the importance of protecting land around them,” she added. “Water moves regardless of property lines, so we’re all vulnerable to the risks of groundwater contamination in this part of the state.”

“Mary and Rich have set out to honor what was on their property before European settlement. The forest and grasslands play a vital role in protecting the region’s groundwater,” said the Conservancy’s executive director, Carol Abrahamzon. “Their undeveloped land offers scenic beauty and wildlife habitat that are now protected in perpetuity. The property’s role in protecting water, wildlife, and climate are a benefit to all – today and forever.”

Is a conservation easement right for your land?

Learn what Mississippi Valley Conservancy does to permanently conserve land
A conservation easement is considered the nation’s highest form of legal protection to permanently conserve land and natural resources. A conservation easement is a voluntary legal agreement between a landowner and a land trust, such as Mississippi Valley Conservancy. The easement limits future uses of a property to prevent activities like residential development, subdivision, and mining while allowing for traditional uses such as wildlife habitat, forest management, or agriculture.
Learn more