Landowners are urged to protect Driftless Region as 'biodiversity hotspot' 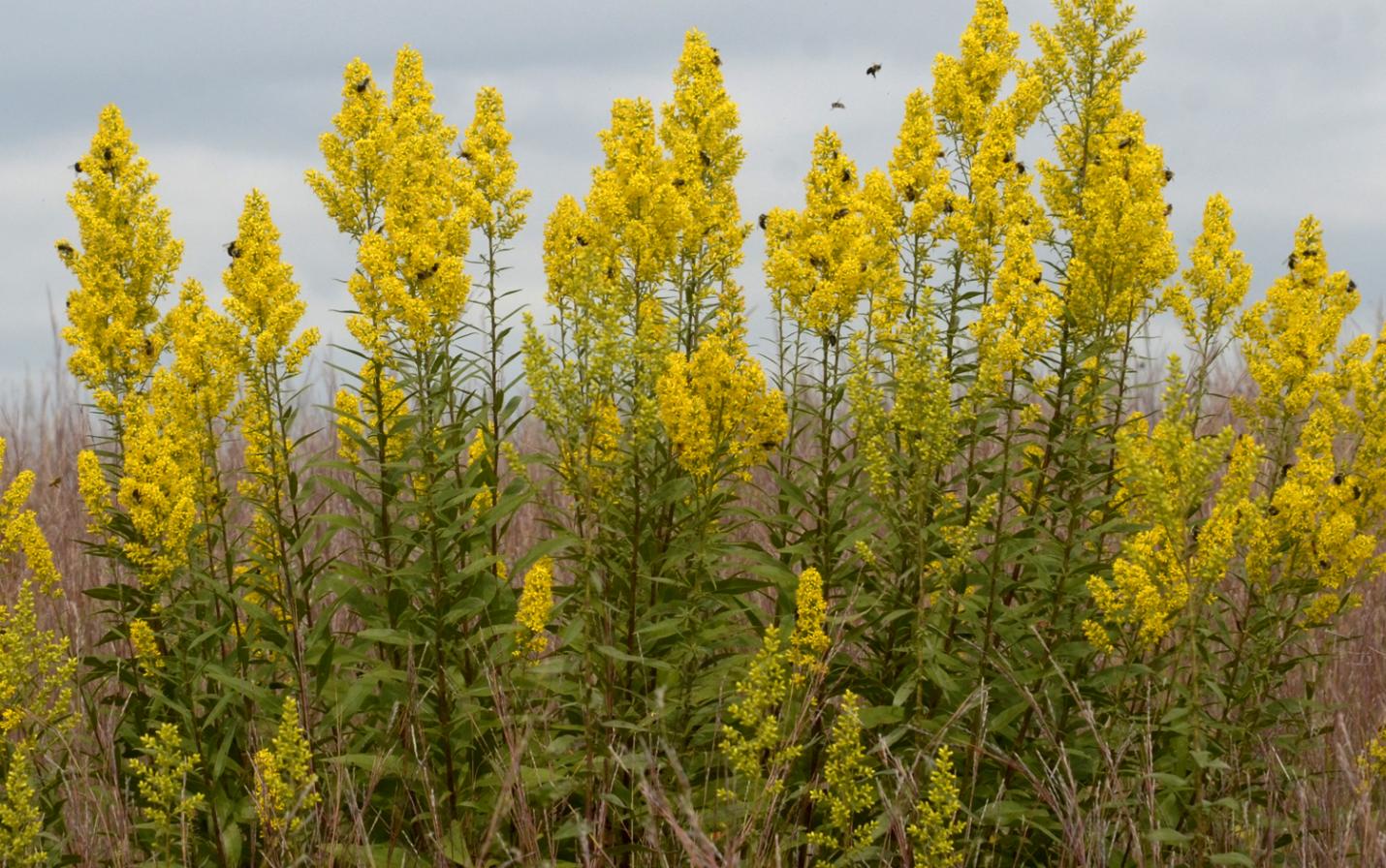 Participants at the fourth in the ‘Conservation on Tap’ series of educational events, sponsored by Valley Stewardship Network (VSN), were treated to Dr. Melinda Knutson’s explanation of why the Driftless Area is one of just two major biodiversity hotspots in the Midwest. Knutson emphasized that biodiversity on the planet is most threatened by dwindling habitat, and that protecting biodiversity in the Driftless Region is crucial.

Almost 70 people gathered at the Rooted Spoon in Viroqua to hear Knutson’s talk on Wednesday, Jan. 9.

Knutson grew up in Yucatan Valley in Houston, Minn., and after taking her PhD from Iowa State University, moved around the country working at different jobs. For her last five years of work prior to retirement in 2017, she worked for the U.S. Fish & Wildlife Service. Since retirement, Knutson has launched her own business, Trillium Consulting, ‘Land stewardship aligned with nature.’

“Melinda has worked with VSN for almost a year now,” said Dr. John Delaney in his introduction. “She writes the most detailed landowner reports I have ever seen.”

Biodiversity, Knutson explained, is the variety of life found on any particular place on Earth. Biodiversity is measured as “the richness of species present – plants, and primary, secondary and tertiary consumers of plants.

Tertiary or ‘third level’ consumers are the predators. They are particularly indicative of the biodiversity in a given place because they cannot survive without all the species below them in the food chain.

“Basically, there are two major biodiversity hotspots in the Midwest,” Knutson explained. “That would be the Driftless and the Ozark Mountains.”

The Driftless is particularly rich in species because it was not glaciated. It’s hill and valley terrain means that there is proportionately more land that is untillable and so available as habitat for wildlife. It is also an area that offers multiple types of habitat.

“What this means is that it is possible to pack more species in a smaller area,” Knutson said.

Why should you care?

“The biodiversity in the Driftless is a legacy of the Earth’s deep history,” Knutson told the audience. “I believe that it is wrong to deprive the next generation of what we have now.”

She went on to express that biodiversity enriches our quality of life, provides ecosystem services to humans, and allows us to have a spiritual connection to nature which studies have shown is good for human mental health.

Knutson explained that in the mid-1800s, the main habitat types in the Driftless were prairies and oak savanna, with a small pocket of maple and basswood east of the Kickapoo River in Southwest Wisconsin.

The main threats to woodland habitats are invasive species, such as Elm and Ash trees.

Wildlife in woodland habitats can include deer, turkey, coyotes and the secretive bobcat. The main threat to the bobcat is coyotes, which are in direct competition for food. Having bobcats is an indicator of the quality of the habitat, according to Knutson.

Before European settlement, prairies were a dominant habitat type, and were maintained by fire started by lightning, or by Native Americans. Native people would use fire to manage the prairie for wildlife habitat to support hunting.

Now, with the exception of goat prairies high on steep hillsides, only 0.1 percent of all prairie habitats remain. The flatland or ‘mesic’ prairies are very rare environments at this point, most of them having been tilled for agriculture. The deep root structure of those prairies is what created the Midwest’s rich soils.

“With the introduction of Monarch butterfly conservation programs, there is now an opportunity for prairie restoration,” Knutson explained. “Monarchs require milkweed to lay their eggs, and most common milkweed that used to grow in fencerows and fields has been obliterated through use of Roundup.”

Knutston said that studies have demonstrated that Monarchs prefer to use the milkweed that grows inside cornfields. Monarchs depend on flowering plants for nectar.

The population of Monarchs is typically measured at their wintering grounds in Mexico. The population peaked in 1997, and experienced a precipitous decline between 2011 and 2015.

“We could easily have lost the species around 2015,” Knutson said. “That is when lots of federal money came into play.

The Driftless is home to over 250 cold-water streams, which are habitat for trout, fish and mussels. It also supports birds such as the Red Stars, Yellow Warbler, and the Song Sparrow.

“What is essential in managing your land for biodiversity is to create a green corridor which allows animals to move in agricultural landscapes, “ Knutson explained. “Buffer strips along streams are also important.”

The Driftless is also home to several rare and unique habitats that have very specialized species that have evolved to thrive there. Such habitats include goat prairies, algific talus slopes and oak savanna.

Goat prairies are found on steep south and west facing slopes, and are typically hot and dry with thin, rocky soils. They are unique to the Driftless Area, and support such rare and unusual species as the Lead Plant, Asters, Pasque Flowers and Blazing Star.

Goat prairies are also home to the timber rattlesnake, which is a state species of special concern. The species, Knutson explained, was nearly obliterated by bounty hunters.

Large parts of the Driftless were covered in the oak savanna habitat – an open woodland with a rich vegetative understory. This habitat is even more rare than the mesic prairie and goat prairie. The main threats to this habitat are lack of fire and lack of management.

Oak savannas are home to species such as the Slender Glass Lizard, which is an endangered species. The lizard looks like a snake, but has ears and moveable eyelids.

Algific talus slopes are another very rare habitat, found only in the Driftless, West Virginia and the Adirondack Mountains. The reason is because they require sinkholes on ridges to be connected to vents down below on a river. In the winter, water in the sinkhole and vents freezes, and then in the summer, the airflow reverses and travels up and out over the ice.

These climates are amazingly cold in the summer, and a unique set of species has evolved to thrive in them. Many of these species are relicts of the ice age, and there are more in Minnesota than in Wisconsin. These rare and fragile climates are mainly threatened by human disturbance and lack of management.

Some rare species that thrive on algific talus slopes include Northern Monkshood, and Cherry Dropstone Snails.

Caves, formed within the Driftless’ fractured karst geology, are another rare and important habitat unique to the region.

Caves provide habitat for many species, and most notably for bats. With the advent of White Nose Syndrome, populations of bat species have plummeted in recent years.

Interestingly enough, farm ponds, though not natural, are actually a significant source of habitat for wildlife and foster biodiversity. Because wetlands are rare in the Driftless, water for wildlife is an important resource. The main threat to farm pond water quality is runoff of nitrogen.

What can I do?

The first step in managing your land for biodiversity is to obtain an assessment. Organizations like Trillium and Valley Stewardship Network can provide this service. The second step is to protect rare habitats like talus slopes and caves, and culturally valuable artifacts such as mounds. One option for this is to pursue a conservation easement, work with your county conservationist or the DNR, and to reach out to groups like The Prairie Enthusiasts, Mississippi Valley Conservancy, and the Driftless Conservancy. The third step is restoration of habitat such as goat prairies and farm ponds.

Bumblebees or native bees use a method called “buzz pollination,” where they jiggle the pollen out of plants. Bumblebees are at risk from pesticides and habitat loss, and are now listed as a federally endangered species. The queen overwinters in a rodent hole, and then emerges to lay eggs and start a new hive each spring. They require access to native, flowering plants in the late fall and the early spring.

Photo of showy goldenrod with bees courtesy of Tom Rhorer. All rights reserved.