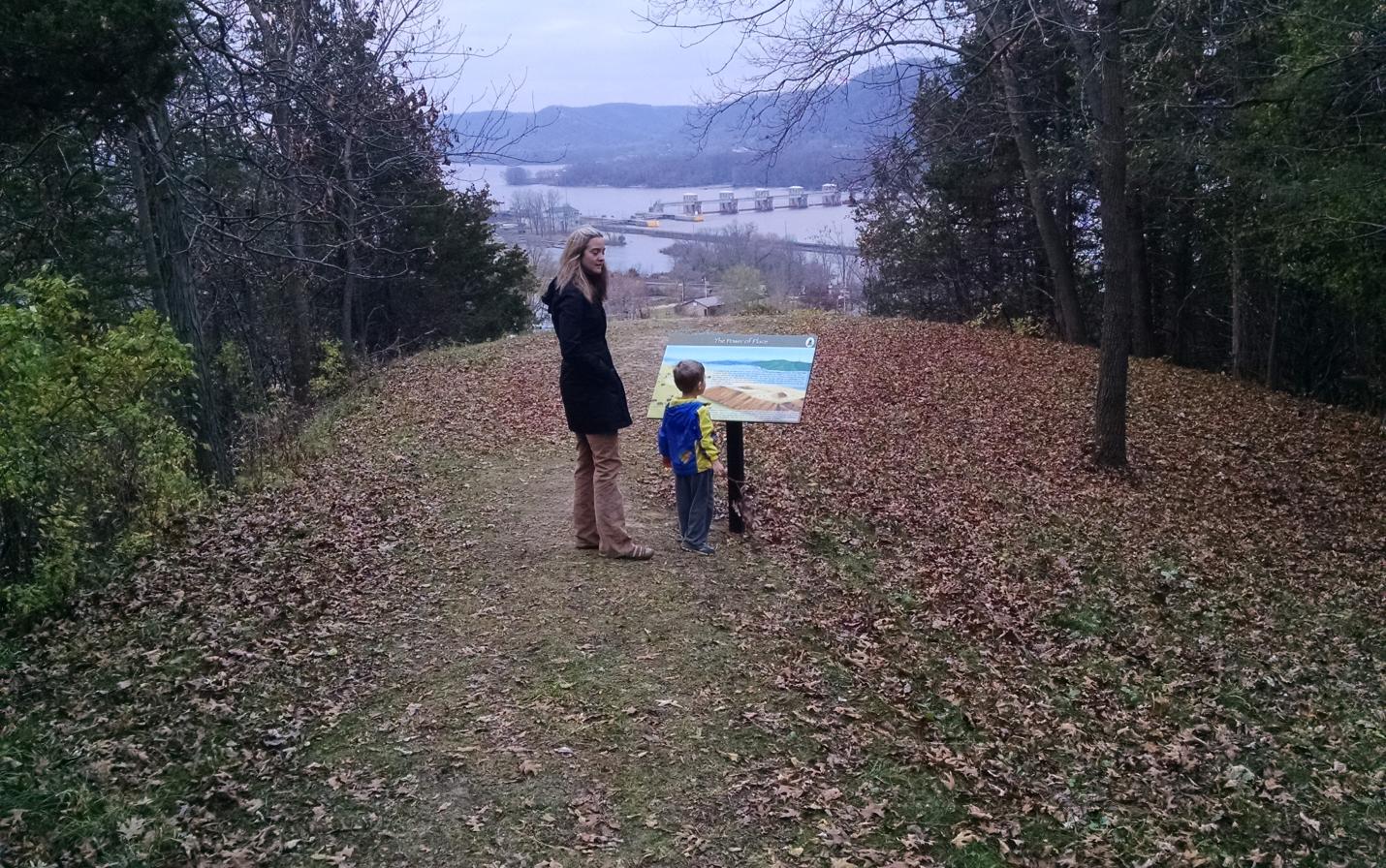 TREMPEALEAU, WI—February 17, 2020— With a Sunday morning ceremony, the Mount Calvary Evangelical Lutheran Church congregation has celebrated completion of a long-hoped-for land conservation easement for its 19-acre Little Bluff property high above the church at Trempealeau.

The congregation has concluded a conservation agreement with Mississippi Valley Conservancy for permanent protection of the bluff, which, by a historic coincidence, was a sacred place for a religion practiced by the Mississippian Native American culture about a thousand years ago.

That's according to Danielle Benden who, with her husband Robert "Ernie" Boszhardt, did extensive archaeological studies of the site and village sites with help from community volunteers in the past decade. They completed interpretive programs for schools and others who visit the Little Bluff Mounds and trail that starts in the middle of the village. Both are archaeologists who worked previously with the Mississippi Valley Archaeology Center at UW-La Crosse.  Their 2017 book "Beneath Your Feet" tells the story of the village and bluff sites.

Mount Calvary Pastor Joan Wittrock said that the congregation's decision to protect the property is consistent with the ELCA's creation care initiatives. She noted that community support for conservation of the property dates back many years. The church welcomes the public to walk the trail to the historic bluff top site.

The Little Bluff site was colonized around 1050 by more than 200 people of the Cahokia Mississippian community across the river from present-day St. Louis who came 500 miles upriver in a quest for Trempealeau Mountain – the only bluff on the entire Mississippi River surrounded by water – and was considered to be the source of sacred power. The Cahokia established homes and raised crops on land now occupied by the village of Trempealeau. On the bluff top, they created ceremonial mounds built to align to the cycles of the sun and probably the moon. Boszhardt found a temple site including evidence of what was likely a perpetual ceremonial fire.

Boszhardt said in a telephone interview that "it's wonderful that the church and the conservancy are ensuring (the bluff's) preservation." He noted that one of the Mississippian village sites occupied the present church property at the base of the bluff.

Victoria Hirschboeck, retired manager at the Trempealeau National Wildlife Refuge and president of the church council, said that the Friends of Little Bluff who built the trail for access to the bluff, approached the church about arranging for permanent protection with a conservation easement. After connecting with the Conservancy, which arranged funding from the Paul E. Stry Foundation for the easement transaction costs, including a complicated survey, "the pieces came together."

Mary Reber, president of Friends of Little Bluff, said she was happy to hear about the protection of the property.  She was one of the community volunteers who observed archaeologists at work in the village and it "just sucked me right in."

Conservancy Executive Director Carol Abrahamzon said the agreement to protect the bluff is part of the organization's strategy to expand, when possible, already protected habitats, making them more resilient to climate change.

Abbie Church, MVC conservation director, who spoke with Sunday school students about wildlife habitat and the significance of the project, said the land adjoins a Conservancy nature preserve to the north and Perrot State Park to the west. Perrot Park, in turn, adjoins the Great River State Trail and the USFWS Upper Mississippi National Wildlife Refuge, creating a corridor of over 1,500 acres all dedicated to wildlife habitat. The land is within the Mississippi River migratory flyway. "Our diverse bird populations have been hit hard by habitat loss and fragmentation, and the best way to reverse this trend is by protecting diverse habitat corridors, such as this one," Church said.

An abundance of fruit and nut trees provide both food and shelter for migratory songbirds. Hickory nuts, acorns, black walnuts, hackberries, elderberries, mulberries, black-cap raspberries and wild grape are among the smorgasbord found throughout Little Bluff. Historically, the blufftop would have been a mix of prairie and oak savanna, and indicators of that history are still visible. Broad, spreading bur oak and white oak trees flank the trail along the ridgetop. The golden stems of big bluestem, a native prairie grass, can be seen today extending above the snow cover. In springtime, the bluish-purple blooms of prairie spiderwort and in mid-summer the tall pink blossoms of prairie tick-trefoil can be seen as well.

Since 2002, with the acquisition of Cassville Bluffs, the Conservancy has played a role in protecting eleven different properties with archaeological features. These sites are home to features such as effigy mounds shaped as bears, birds, turtles, panthers, and more typical linear and conical mounds. Sites have included Native American rock shelters, village sites, and finds such as mastodon bones, spearpoints, and arrowheads. The Conservancy has partnered with both the Mississippi Valley Archaeology Center and the Archaeological Conservancy based in Albuquerque, New Mexico on archaeological preservation projects. Typically these sites feature habitats of ecological significance in addition to the archaeological resources.

Pictured above are visitors at the top of Little Bluff. Photo by Robert "Ernie" Boszhardt.

At the closing ceremony.