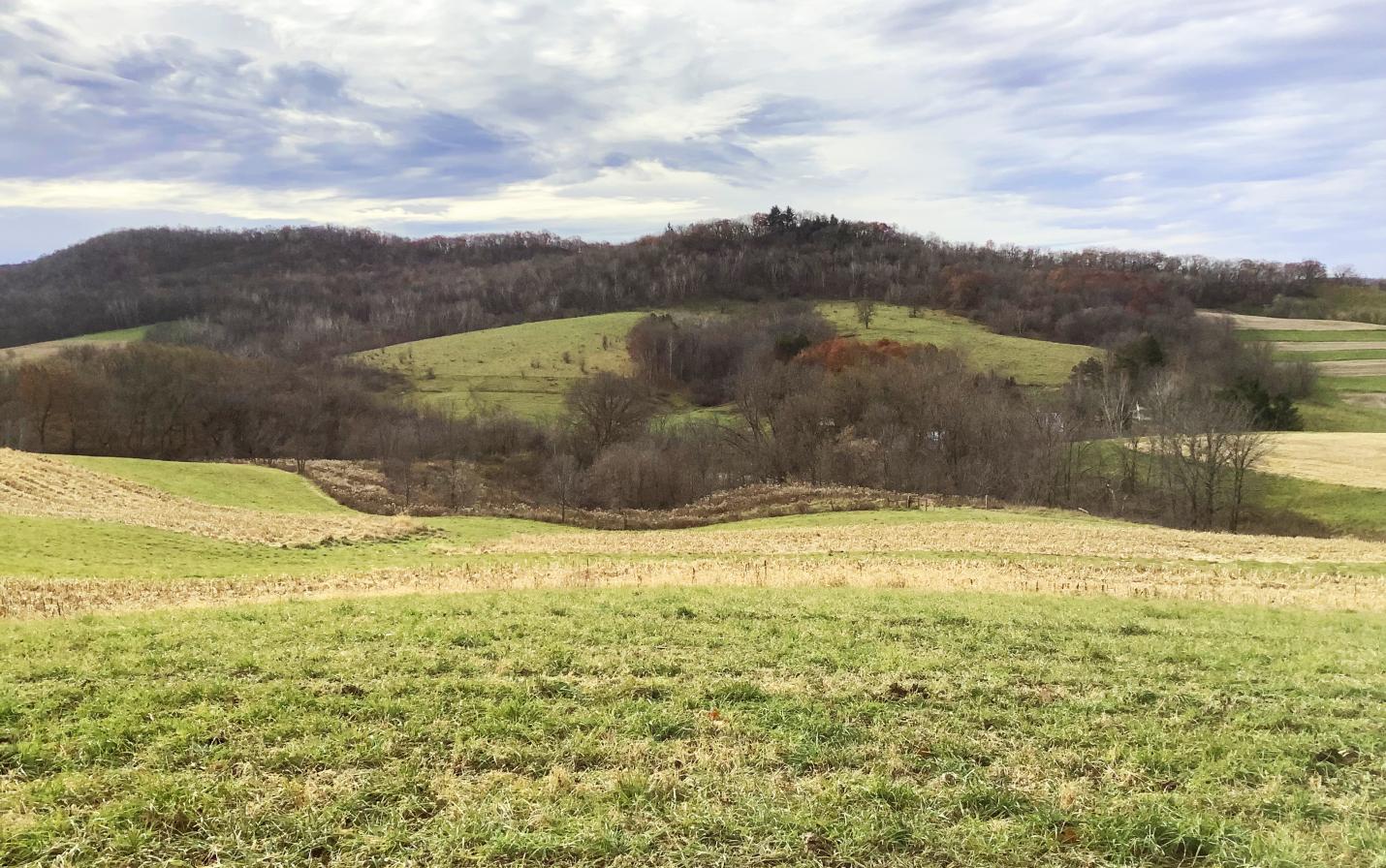 ARCADIA, WI – In a time when more than 2,000 acres of U.S. agricultural land are converted every day to non-agricultural use and small farms are swallowed up by conglomerate farms, one farm couple’s long-range planning bucks those trends. Karen Hanson has lived on the Hanson family farm, since marrying Bud Hanson in 1981. Bud’s father was born on the farm in the 1890’s, and together they farmed and cared for the land. Today, five years since Bud’s passing, Karen manages the farm while working to accomplish the rest of the plans she and Bud developed for its conservation. Part of that plan was accomplished on February 15, 2022, when Karen entered into a conservation agreement with Mississippi Valley Conservancy.

The Hanson farm consists of 261 acres of scenic wooded blufflands and rolling organic farmland within the Middle Trempealeau River watershed. The property includes pastures and farmland with rich, productive soils for farming and habitat for wildlife. Its geological features  include rock cliffs and outcrops, silt-loam and stony soils, portions of which are designated by the Natural Resources Conservation Service as ‘farmland of statewide importance.’

The farm also features numerous water resources, including the underlying groundwater, springs, seeps, and over a half-mile of frontage along both banks of a small, spring-fed creek that feeds the Trempealeau River downstream. “Wisconsin’s water resources are very sensitive to pollution and runoff. Karen’s dedication to organic farming and maximizing perennial vegetation plays a huge role in protecting the health of the water not only on her property, but to all of the flowages downstream.,” said Krysten Zummo, conservation associate at the Conservancy.

The forest on the land includes a diverse mix of native tree species, with a significant population of butternut, a state-listed species of special concern. The prairie and sedge meadows provide a diverse mix of sedges, grasses, and wildflowers – all important habitat for declining grassland-nesting birds, pollinators, and an abundance of area wildlife.

The wooded blufflands and rolling agricultural lands on the property provide a scenic resource for the public, visible on both sides of State Highway 95 and from adjoining and nearby properties.

Bud Hanson and his father raised a variety of livestock on the farm, including dairy cattle, Aberdeen Angus beef cattle, and pigs, in addition to corn, hay, and small grains. All of this was done without chemical inputs, and the Hansons chose to keep it that way. To manage the farm while also working off the farm as teachers in local school districts, they sold the livestock and found tenant farmers who wanted to produce organic crops and livestock. To make that possible they had the farmland certified by the Midwest Organic Service Association (MOSA). Today, part of the farmland is rented for summer grazing and part is rented for organic crops produced along contours of the land for the prevention of soil erosion.

“Many aspects of farming have changed over the years,” said Karen Hanson, “but we’ve worked hard to maintain the health of the farm – the richness of the soil and the natural areas for wildlife.”

According to a recent study by the American Farmland Trust (AFT), some 249,800 acres of Wisconsin farmland were developed or compromised between 2001 and 2016. Of that, 83,700 was rated as best agricultural land and of the land converted 71,600 acres were converted to low-density residential development. That’s part of a national trend during the same period in which 11 million acres of agricultural land were paved over, fragmented, or converted to uses that jeopardize agriculture, curtailing sustainable food production, economic opportunities, and the environmental benefits afforded by well-managed farmland and ranchland.

The AFT study points out that "climate change, including increases in frequency and intensity of extremes, has adversely impacted food security." AFT cited the Intergovernmental Panel on Climate Change (IPCC) finding that less productive and degraded agricultural lands restrict what can be grown and reduce the soil's ability to absorb carbon. “It is this dual role – both food production and providing a natural solution for climate change that makes preserving farmland, like the Hanson property, vital,” said Krysten Zummo.

According to Steve Okonek, UW Extension Agent for Trempealeau County, many people are unaware of all the natural services provided by farmland. “It’s important to keep land in agriculture, and not have it subdivided, so it can continue to support crop production, retain water, and provide wildlife habitat,” he said. The Hanson conservation agreement permanently prohibits subdivision and residential development of the land, thereby increasing the chances that it will continue to be farmed into the future.

Karen Hanson’s agreement with Mississippi Valley Conservancy for preservation of the farmland is through a conservation easement – a legal agreement that, in this case, is between the landowner and the local land trust. The voluntary agreement permanently restricts certain uses of the land, such as residential subdivision and quarrying. The landowner continues to own and use the land as they have in the past and the agreement does not allow public access. “It’s unlikely that our children will come back to farm the land, so the conservation easement ensures that the farmland and wildlife habitat stay as they are when the farm is eventually sold,” said Karen Hanson.

“We are grateful to Karen Hanson for fulfilling the vision that she and Bud created for their farm’s future. Thanks to them, valuable farmland, water quality, and wildlife habitat will be forever protected in Trempealeau County,” said Carol Abrahamzon, Executive Director at Mississippi Valley Conservancy.

“Farms Under Threat: The State of the States,” American Farmland Trust © 2020